As Jesus approached Jerusalem and saw the city, he wept over it and said, “If you, even you, had only known on this day what would bring you peace…” Luke 19:41-42 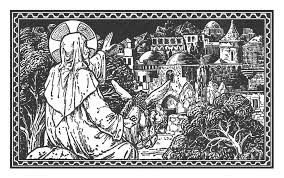 In my previous blog post, “What Breaks Your Heart?“, I posed this question: “What about our world makes you angry? What seems unfair? What breaks your heart?” and went on to pose this thought, “The deeper question is, do these things break our hearts? Do they cause us to weep, to get angry, to get active?” Here is a follow up to that post.

In the passage noted above, Jesus, as he comes within view of Jerusalem, the Holy City, stops and weeps, his grief here for the city (as well, I’m sure, for the inhabitants within it). This idea is key to me, that he grieves for the city, for this seems to denote a particular grief for things particular to cities: systems of economics, government, politics, social functions, policies, procedures, education, business…indeed, all the systemic organizations and institutions that make a city a city.

What, then, does it mean to grieve for a city? This is the question with which I wrestle in my sphere of concern, education, and I know it is the question friends of mine wrestle with in their spheres of concern ranging from foster care and marginalized women to city planning and under-resourced communities.

To grieve for a city is to grieve both for the individuals mourning in the streets as well as for the systems that create, perpetuate, and legitimate the grief in the first place. The systems and institutions that miss what might have brought peace if they had just listened to the groans of the vulnerable in their midst.

To grieve over a city is to grieve over the failings of the city to live up to its own highest ideals; over its failure to care for the marginalized, the powerless, the fatherless wandering broken down Main Street; to burn with righteous ire over the injustices that seem to go both unnoticed and unanswered.

To grieve over a city is to seek upstream solutions to downstream problems. To work at the narrative level that governs systems that affect organizations that oppress individuals. To re-imagine the very nature of the institutions themselves (whatever they may be–business, government, education, social services, church, etc.).

What, then, characterizes those who grieve over a city? What sets them apart?

For one, they are rooted to the space for which they grieve. In other words, they are not seeking out jobs to polish their resumes, climbing corporate ladders that take them crisscrossing the country with no real sense of place or home. Instead, they have chosen their city for the long haul. To paraphrase one writer, they are dedicated to living out a long obedience to the same place (for a great example of one group of folk dedicated to that work, see this article titled, “A Long Obedience in the Same Downtown“).

Two, persons of grief go all in. They leave their jobs, they move their families (often into questionable neighborhoods), they make decisions others scoff at, they trade in resumes for relationships, all in order to spend themselves on behalf of the hungry, the poor, the voiceless, the fatherless, the addicted, the vulnerable. They do not just support causes from the sidelines or “volunteer” once a month; they have literally set their lives down for their city. There is little (if any) sense of personal gain and glory. They are in the game full bore, and for them, there is no going back.

Three, their grief leads to sufferable action. They know their choice to spend themselves on behalf of the broken in their city won’t be comfortable, glamorous, socially acceptable, or something to brag about at dinner parties, nor does it yield impressive business cards or enhance the resume. What they know is that somewhere out there is a starving child, a girl caught in the maw of human trafficking, a strung out single mom, a jaded, alcoholic dad, a 5 year old destined for incarceration crying out for them to stay in the game, to listen, to be there, to “give a damn”.

They would agree with this quote from David Purpel: “We must confront the realities of our abundance and richness as well as the reality that in spite of our wealth (some would say because of it), our nation includes millions who are below or at a near subsistence level. For Americans to live prosperously and contently while hundreds of millions struggle for minimal existence is absurd and unacceptable. If we consider the very real possibility that our prosperity is at the expense of human misery, than the situation is obscene and outrageous.”

The city in which I live, Oklahoma City, is wonderfully blessed in that it is chock full of people whose grief has led to action. People like Ben, Lance, Tim, Brad and Kim, Joe, Laura, Emilee, Wes, Rodney, Chris, Mike, John-Mark, Stephan and Scotia, Jay, Sandra, Nate, Blair…literally, the list goes on and on. It includes CEOs of nationally recognized corporations who left their jobs to enter the muck, former district attorneys who turned their political losses into a movement centered on the common good, the head of a nonprofit formally based in Portland who relocated his family to OKC because this is where folks are passionate about the fatherless, and a teacher who started a small school for refugee students so they would not get eaten up by the system. The one thing all these individuals have in common is their compassion–literally, their willingness to “suffer alongside of” their city in order to see transformation happen.

***I look forward to your comments below!

1 thought on “To Grieve Over a City”