Growing up, my mother continually gave this career advice to my brother and to me: “Find work to do with your life that you so love that you would gladly do it for free.” At the time, I didn’t quite get it, but now, as I step into the unknown space of pursuing such work, I am starting to see both how wise and how true that advice is.

Here is what my mom meant by her advice: give yourself to something that, as Frederick Buechner wrote, connects your great passion with the world’s great need. My mom, though not a serious philosopher, nevertheless understood the difference between “career” and “calling.” And now, many years later, it is starting to dawn on me as well. (Let me say here that I know and fully acknowledge that there are many for whom a job means survival and sustenance, so I do not wish for this to be a utopian ideal only for the well-off. I also believe that every person can pursue his/her deep sense of purpose in life, either in the work they must do, or in stepping into work that connects to the deep needs of another).

Here, then, is my distinction between “career” and “calling”:

Career is defined by ladders, resumes, networking lunches, power plays, bottom lines, profit-maximization, and doing work that, if we were really honest with ourselves, we would not do if we were not paid to do it. The “careerist” is committed to long hours and hard work not as a social or communal good, but as a way to reinforce the visibility of his own self-worth to those above him in the occupational food chain. The careerist is willing to move his family all over the country, from job to job, city to city, dreaming, perhaps, of finally landing that “one” position that will, indeed, make him the Wolf of Wall Street. (Indeed, I once knew someone who left his family behind to take a job half a continent away, all in the name of “career advancement”). The careerist is rarely defined by any deep love for the work itself; in fact, the careerist may actually “hate” the work, may come home every night frazzled, frustrated and furious; may, like Gregor Samsa in Kafka’s Metamorphosis, recognize how dehumanizing the whole thing is, but still, like Samsa, climb out of bed each morning, placing one bug-leg after another down on the ground, anxious to not miss the morning commute. 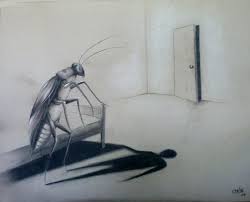 Buechner says this of the careerist ideal, “The world is full of people who seem to have listened to the wrong voice and are now engaged in a life’s work in which they find no pleasure or purpose and who run the risk of suddenly realizing someday that they have spent the only years that they are ever going to get in this world doing something that could not matter less to themselves or to anyone else.“

**Now please understand: I have spent most of my professional life as the careerist. I have made professional decisions that almost cost me my family in the name of being a “company man”. I speak not as one condemning the careerist, but as one who grieves for him. Things do not work out well for Gregor Samsa, or for Willy Loman in Death of a Salesman (hence the title), or for the Wolf of Wall Street, and I have seen just as much despair, brokenness, ruin, depression, attempted suicides, body dysmorphia and substance abuse in affluence as ever I saw in poverty. The problem is that we tend to glorify the careerist, never minding that, in so doing, we might be contributing to his moral, social, emotional, relational, mental, physiological, and, paradoxically, professional demise.

Calling, on the other hand, is about covenantal relationships, purpose, passion, and a deep sense of mission. Both the careerist and the “called” are hard workers, but the difference is in the work for which the “called” gives her all. Both may do good work, but only one intentionally pursues work that is Good. Calling requires living transcendently, paradoxically and mindfully. It recognizes the importance and value of deep roots (what one writer calls, “a long obedience in the same direction”). Calling leaves legacies that last as long as the great cathedrals of Medieval Europe. Calling is hard to identify on a business card and rarely does work for the sake of “resume-building” (in fact, those I know who are pursuing such a sense of mission haven’t used their resumes in years). As John Wood, the founder of Room to Read, states in his book, Leaving Microsoft to Change the World, “I knew there were literally hundreds, if not thousands, of people lined up to take my spot (as head of Microsoft Asia), but there was nobody lined up behind me to do this work (help children in impoverished communities get the education they deserve).” Those who are called know intuitively that no one else is coming. Without them spending themselves on behalf of the broken, the marginalized, the voiceless, a child might remain in poverty, a young girl might be trafficked, a single mom might give up the fight, a homeless man might freeze to death, a dad might quit Alcoholics Anonymous.

Buechner, in the same breath as he writes about the careerist, says this about calling, “It means for us simply that we must be careful with our lives because it would seem that they are the only lives we are going to have in this puzzling and perilous world, and so they are very precious and what we do with them matters enormously.”

So back to my mom: As a mom who deeply loved her sons as human beings full of wild potential and not solely as earners of paychecks, she instilled in us a deep sense of possibility, vision and value. To that end, she instilled in us the belief that, if we pursued what we loved, we would never be impoverished, regardless of our financial situation.

So Mom, I want to say thank you for giving me the courage to step into this great unknown space called “calling” where there is no promise of wealth (or even a paycheck!), but where I have found great purpose. Without you, I could not have positively answered this summons “Whom shall I send into the pain of the world?” with the dangerous, foolish, perilous, prophetic response, “Send me.”

Where Does the World Need You?

2 thoughts on “Career Advice from my Mother”