Greed, gluttony, lust, envy, [and] pride are no more than sad efforts to fill the empty place where love belongs, and anger and sloth [are] just two things that may happen when you find that not even all seven of them at their deadliest ever can. –Frederick Buechner, Whistling in the Dark

Before I explain that, let me unpack a bit what I mean by “Virtue” and “Vice”. These two terms are more typically found and understood within the Catholic tradition, where you find such things as the “Seven Deadly Sins”–a more theological modification of the philosophical idea of Vice. Historically (going back to Aristotle, then to Augustine and later Thomas Aquinas), Virtue and Vice were understood as habitual character traits. Unlike something we are born with (like hair or skin color), Virtues and Vices are acquired moral traits that get sown into our character through repeated actions that become habits. Here is one way to think of it: your thoughts influence your actions, your actions, over time, become habits, which, over time, wear grooved patterns in your character that shape the kind of person you become.**

You will note that the seven Vices are in direct opposition to their corresponding Virtues: Gluttony is the opposite of temperance, for example.

Take Gluttony, for example. Traditionally, Gluttony was understood to mean unrestrained consumption, represented by extravagant corpulence and the lavish ingestion of food, drink, and pleasures of all kinds (wine, women, and song would all fall under this definition of Gluttony, as might movies, video games, and time spent on Facebook); today, Gluttony is the mainstay of every commercial we watch, every drive-through fast-food joint we frequent, and every cruise line buffet I’ve ever stood in. Gluttony, unrestrained consumption, seems to be one of the highest goods we are told to pursue in everything from our education to our leisure time. The problem, however, is that Gluttony was considered a “capital” Vice precisely because it inhibits justice. That is, in a world with a limited supply of resources, the Glutton consumes to the point of waste what could be used to provide comfort, health, succor and life to the most vulnerable members of society. The Glutton expands his own waistline at the expense of his neighbor (see the parable of the Rich Man and Lazarus in Luke 16:19-31 as but one example of this). Gluttony, a “deadly sin,” has become “virtuous” to such a degree that we over-consume everything: food, pleasure, natural resources like water and forests, the environment, drugs and alcohol, cafe lattes,  even each other (it is no secret that human trafficking is a multi-billion dollar industry). This Vice has become “virtuous” with catastrophic results. 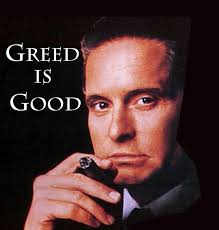 Greed is another example of a Vice that has now become “virtuous”. Traditionally, Greed (or avarice–from the Latin word for “craving”) was considered the Queen Vice, the one from which the others sprang. Paul, writing in 1 Timothy 6:10, says that “the love of money [philarguria—the “lust for wealth”] is the root of all kakon” (“evil”—“that which is inwardly foul, rotten, or poisoned”). Jesus says in Luke 16:13 that no man can serve (douleuein, which literally means “to be in bondage to, to be enslaved”) two masters. You cannot serve both God and Mammon.” Cicero called greed the “immoderate love of possessing.” Hinduism places greed as the “destroyer of goodness that brings great misery.” Buddhism calls greed “the real dirt of life.” And the Tao Teh Ching says that “there is no greater calamity than greed.” In other words, every major religion and philosophy has disagreed with Gordon Gecko’s statement in the movie Wall Street that “Greed is good.” And yet, Tim Keller, a pastor and writer, states that as a pastor he’s had people come to him to confess just about every kind of sin imaginable, except greed. “I cannot recall anyone ever coming to me and saying, ‘I spend too much money on myself. I think my greedy lust for money is harming my family, my soul, and people around me.”

And why would they? Everywhere we are told that the summum bonum, the highest good, of life is to acquire the greatest amount of wealth and riches we can. That, as I have said before, is the overarching narrative of education: get the degree to get the job to make money to buy stuff. Wall Street drives Main Street in everything from politics to religion, and if you were to ask an alien on Mars what “god” Americans worship by where they spend their time, that alien would say: “Well, Mammon, of course.” As James Smith says, the liturgy of the mall is alive and well (indeed, I would argue that the mall is the greatest cathedral with the greatest amount of worshippers in our culture. And now, many of our churches resemble malls more than cathedrals).

See my point? It’s not that we have forgotten the Vices; it’s that we have made them “virtuous”. (I haven’t touched the other Vices for sake of time and space, but you get my point). The question is, how, in such a world, can we make the Virtues “virtuous” again?

Thoughts? Feel free to leave your response in the comment section below.

**See Glittering Vices: A New Look at the Seven Deadly Sins and Their Remedies by Rebecca Konyndyk DeYoung for a deeper look at the history of Virtue and Vice.

3 thoughts on “The Vicious “virtues””