**In the next few posts, I am going to spend some time unpacking what I think is a central way of thinking about life counter to the predominant mode of focus: that of Oikonomics instead of Economics. This line of thinking is heavily influenced by “Economics and Education for Human Flourishing: Wendell Berry and the Oikonomic Alternative to Neoliberalism,” by Joseph A. Henderson and David W. Hursch published in Educational Studies Vol. 50 (2014), 167-186.

In countless previous posts, I have unpacked what I think are the dangers of pursuing consumption and accumulation as a way of life. I have detailed the many ways in which, both empirically (what the research says) and anecdotally (what I have seen in my own practice as an educator and living as a human being), the ethics of materialism end in tragic brokenness, ruin, and regret. Having taught in both low socio-economic schools and schools of high affluence, I have seen the same eating disorders, cutting, depression, stress, anxiety, substance abuse, fatherlessness, divorce, and suicide attempts in both worlds. To me, it’s not that we need to turn poor folk into rich folk; what we need is to tell a better story for all folk!

The problem, as I have tried to make clear on this blog, is that the overarching, meta-narrative of our culture is one that funnels individuals, through the promise of happiness (like the Siren’s Song in The Odyssey) towards destruction and death. This is not a new problem; indeed, it is one that, for most of human history, was quite clear: what we consume ultimately and always consumes us.

I want to spend some time in the next few posts digging into this a little further by exploring two different social imaginaries (what Charles Taylor calls the myths, stories, and values that shape our way of seeing and being in the world–our worldview, if you will): The Social Imaginary of Economics vs. The Social Imaginary of Oikonomics. As you can imagine, it will take some time to fully flesh all this out, so I want to give just a brief sketch here, then spend the next few posts unpacking this in greater detail.

But first, some definitions:

By “Economics,” I mean several things: the focus (defined by corporate executives, politicians, financiers, academics, marketing, advertising, etc.) on fiscal growth as represented by the such terms as the “bottom line,” “return on investment,” “cost/benefit analysis,” “corporate profits,” “profit maximization,” “growth,” “productivity,” and, obviously enough, a focus on all things “economic”: economic sustainability, profitability, competition, advantage, development, etc. In short, by “Economic” I mean that which we all mean by “economic”: the overwhelming ideology produced by the marketplace that the production of capital and the accumulation of wealth for the consumption of goods and services influences, guides, and directs every facet both of our public and private spheres. That meta-narrative that gives rise and shape to the choices we make (professionally, personally, relationally, geographically, even spiritually); to the way we spend our time, talents, and treasure; to how we organize our lives (both daily and over the long haul); and, ultimately, to the very identities we shape for ourselves and the deeper meaning we give to what matters (what we mean when we define being “well-off,” for instance). 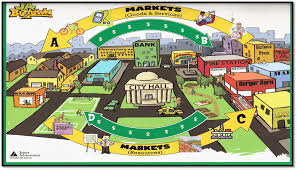 By “Oikonomics,” ironically, I am harkening back to the etymological root of “economics,” for, indeed, we get our word “economics” from this Greek word, so that, for a long stretch of history, when people talked about “economics,” what they were really talking about was oikonomics. Oikos, then, is the Greek word for “household” used both by Aristotle (Book 1 of The Politics) and by Jesus (in the story of Zacchaeus, for example. Luke 19:1-10).

In The Politics, Aristotle distinguishes between two types of financial arrangements: oikonomia and chrematistike: oikonomics is that which produces, maintains, and sustains value for the household and community over the long haul; chrematistike is that which maximizes individual accumulation through the exchange of money in the short run. He says, “The acquisition of goods is of two kinds: one, which is necessary for household management (oikonomics); the other, which depends on exchange (chrematistike), is justly regarded with disapproval, since it arises not from nature but from men’s gaining from each other.”

Jesus unpacks this as well in the story of Zacchaeus, the “wee little man” who climbs the sycamore tree to get a better glimpse of Jesus. Zacchaeus was the chief tax collector in his community, which meant that, as long as he got what Rome required, he could set the tax rate at whatever he wanted so that he could line his own pockets with the excess. As you can imagine, this would make him one of the most despised persons in his community.  As James Orr describes it, “In Judea, under the Roman system, all circumstances combined to make the publican the object of bitter hatred. He represented and exercised in immediate contact, at a sore spot with individuals, the hated power of Rome. The tax itself was looked upon as an inherent religious wrong, as well as civil imposition, and by many the payment of it was considered a sinful act of disloyalty to God. The tax-gatherer, if a Jew, was a renegade in the eyes of his patriotic fellows. He paid a fixed sum for the taxes, and received for himself what he could over and above that amount. This is why ‘publican’ became synonymous with ‘sinner’ and ‘pagan’ in the New Testament.”

In such a system both of civil and religious oppression, stands Zacchaeus, the chief tax collector, whose extravagant wealth has come off the backs of many in that very crowd (his neighbors, his community, and, quite possibly, his own family). And yet, when he encounters Jesus, he says that he will give away half his goods to the very ones he impoverished and to restore four-fold (300 percent) all that he had gained illicitly. And Jesus’ response here is telling: when Zacchaeus denounces his “economic” gain, Jesus proclaims that salvation has now come to Zacchaeus and his “household,” his oikos.

Economics is about profit maximization, capital accumulation, and the consumption of goods, services, resources, the environment, other species, other humans, and, eventually, ourselves.

Oikonomics is about communal maximization, relational accumulation, and the healthy stewardship of goods, services, resources, the environment, other species, and other humans that ends in blessing and health for all.

The next post: “The Real Cost of Economic Progress”

8 thoughts on “Economics vs Oikonomics”