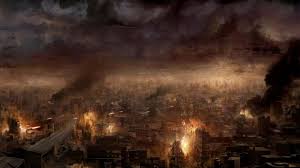 In the current educational vernacular, school reformers tell us that schools (teachers, administrators, and students) are in a Race to the Top whereby the fastest shall win the glory, gain, power, profit, and pleasure (that this metaphor intentionally means there will be losers is another point altogether).

And yet, as the quote by H.G. Wells above points out, we are in another race entirely.

History, says Wells, is the race between education and catastrophe.

What in the world does this mean, especially in light of the modern narrative of education? To get at this, let’s unpack both the idea of education and of catastrophe, beginning with catastrophe.

In his novel, The World Set Free, Wells describes a world racing towards nuclear disaster (this was 1914, mind you). In this work, he writes:

“Certainly it seems now that nothing could have been more obvious to the people of the earlier twentieth century than the rapidity with which war was becoming impossible. And as certainly they did not see it. They did not see it until the atomic bombs burst in their fumbling hands”

Though Wells is talking about destruction through highly atomized warfare, the sentiment can also be applied to any means of destruction that looms so large before us that we cannot help but see it, if only we had eyes to see.

There are many catastrophes that should be more obvious to us than they are: our failure to deal humanely with the racial tensions that still divide us, our soon-to-be depleted water aquifers, our failure to acknowledge the humanity of the other, the vicious avarice that makes consumers of us all.

History, indeed, is the race towards such catastrophes (and many others besides).

This is the true race with which we must concern ourselves as persons, as communities, as neighbors, as a species on this planet.

What role, then, does or should education play in all of this?

The question of what it should do, on the other hand, dates back as far as Plato, who said that education should teach children to appreciate and aspire to beauty, wisdom, and justice. For Aristotle education (paideia) was for the formation of virtue in order to shape certain kinds of persons (persons of moral excellence) who work to shape certain kinds of communities (communities of eudaimonia–well-being and flourishing). For Judeo-Christianity, it is the admonition to train a child up in the way he should go, so that when he is older, he will not depart from it. For Jean-Jacques Rousseau, it is the shaping of a virtuous person free from the chains of corrupting society.

In other words, throughout history, the greatest acknowledged thinkers and practitioners of education believed that education should shape in students: wisdom, virtue, and compassion.

Here is the common thread: education was about pursuing virtue and avoiding vice. It was about shaping the internal person, not about external pursuits. It was a long process, shaped by deep conversations with the mentor. It understood the great test to be the test of one’s life as a person of moral character in the community. It sought to curb those things which might lead to tragedy (the harmatia, or tragic flaw, we all have in our character).

So then, returning to Wells’ quote, history (especially our history) is in a race between education and catastrophe. It is a race, it is the race, to which we must pay attention. It is not a race to the top, but a race towards our commonly shared destiny, for good or for ill.

2 thoughts on “The Race of Education”